We all have authors who we adore, and snap up their books whenever there’s a new one. Sometimes authors have newsletters that you can subscribe to, and they’ll give you special insider deals on new titles coming out. (I have one, too!)

Well, Amazon is getting in on the game, and I’ll show you how it works.

Amazon Follow is a new addition to the community software on the site. Not only can you discuss books and things with other customers, but now you can follow specific authors, and receive personal notifications from them when they release new books. Here’s how it works:

First, search up an author you like. Click on their author name to get their Author Central page. 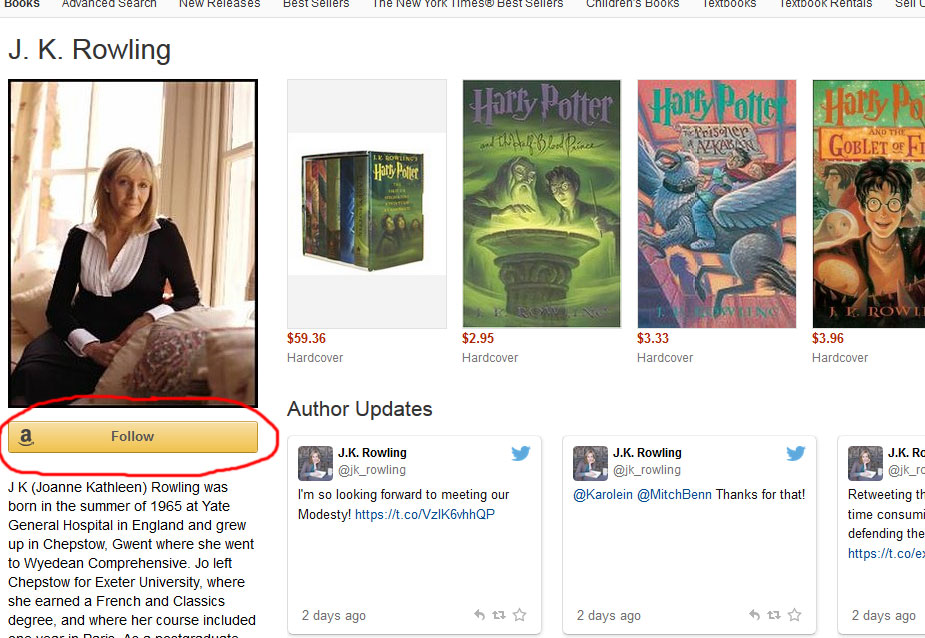 See the big yellow button under their picture? Click that and you’re golden. 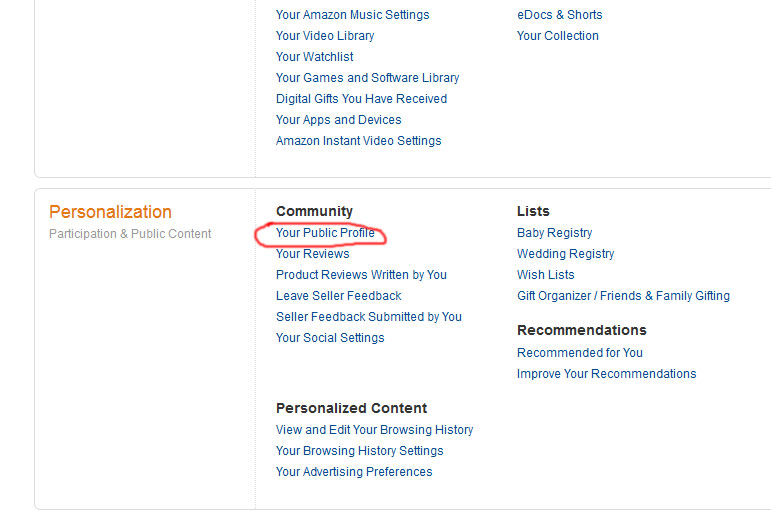 There’s a nice list right there, which lets you add or remove authors with one easy click.

Now you’re all set to receive official emails from Amazon whenever one of your favorite authors releases a new book. Especially handy if you’re not sure if they have a newsletter or not!

If you’re an author, this is a golden opportunity to do business with fans. Set up your Author Central account posthaste!

So I’ve been playing Sonic Boom: Rise of Lyric lately. And this game is so gorgeous, it makes my crusty artist’s heart sing. Check out some of this concept art: 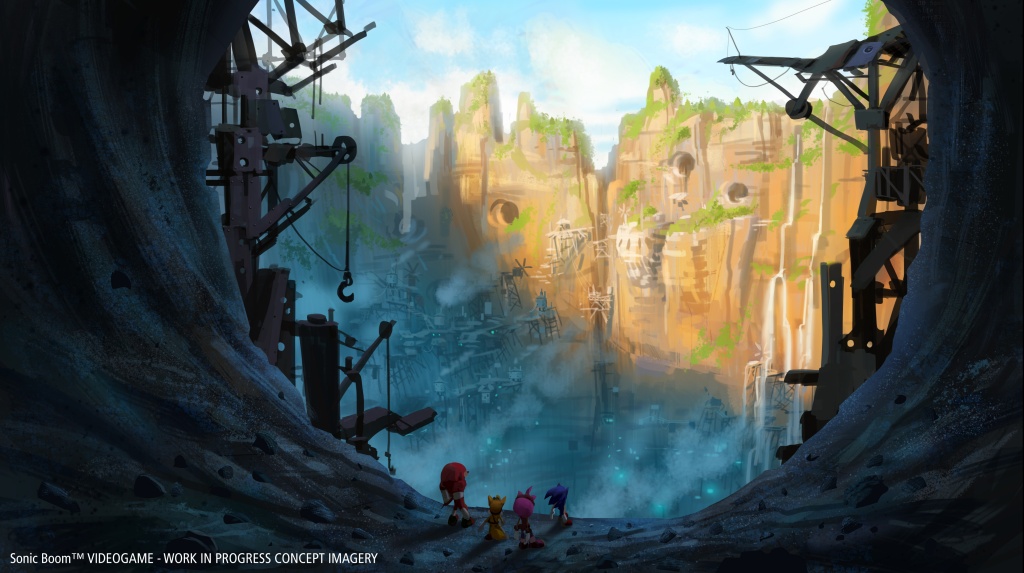 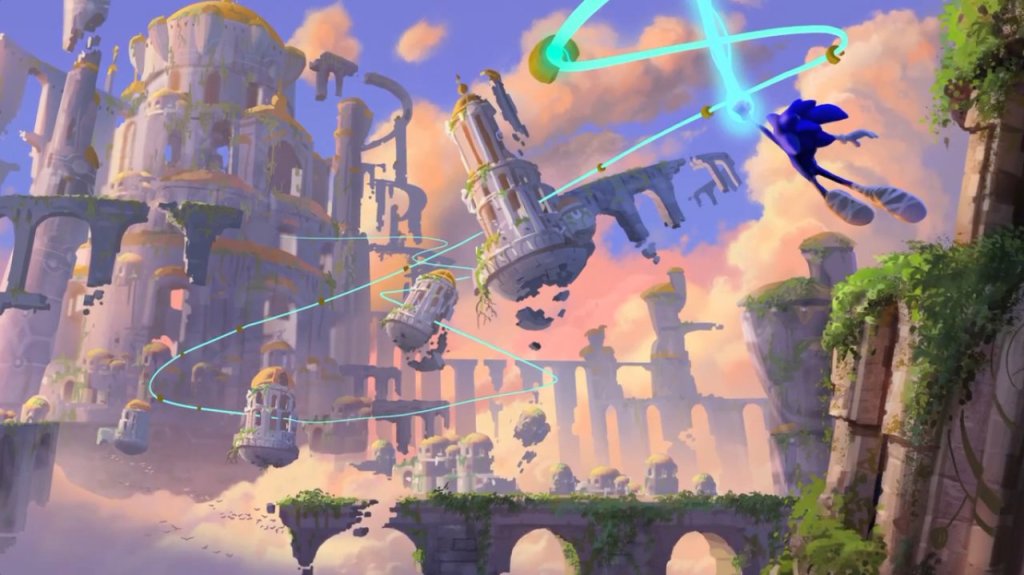 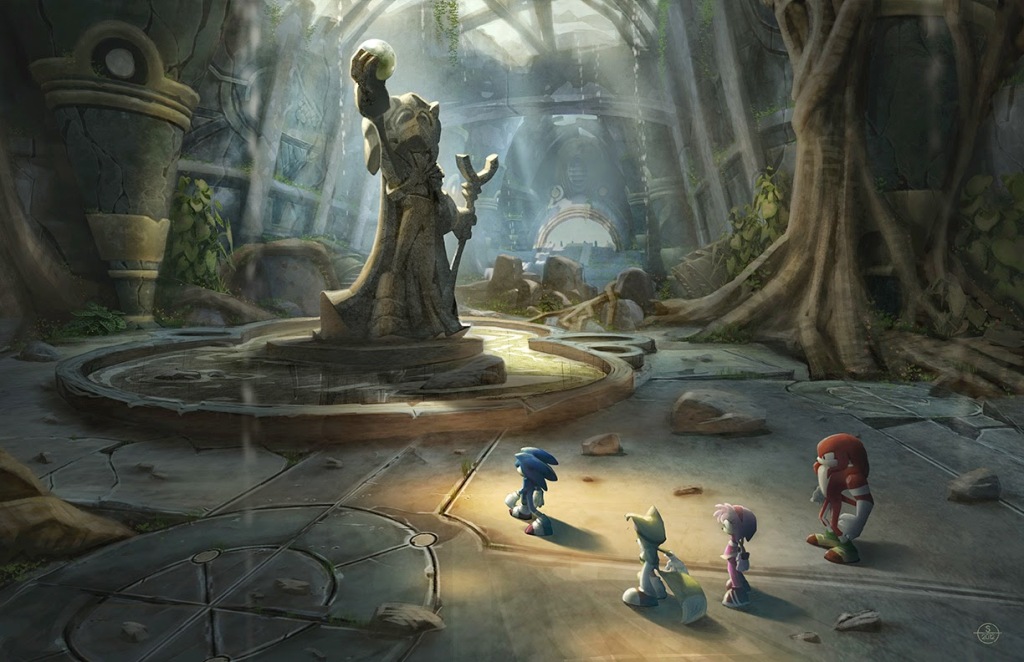 Arent’t they wonderful? As a Sonic fan from the mid-90s, seeing this kind of treatment makes me sooooo happy. I’ve been playing it, and the world is massively intriguing. Kind of civilization built on top of a previous, advanced civilization, only the modern day people are slowly recovering the old technology.

Anyway, I had to make a stab at drawing something like this, myself. It’s time for a matte painting!

Note: A true matte painting is made with photos. This is what they typically look like.

Since I’m an utter noob, I just painted over a free render from deviantart.

So! Here’s the render I started with.

And there you go! Painting this was basically like eating candy, only afterward, instead of having a sick stomach, I had a piece of artwork. Score!

I can’t wait to try more paintings like this, only, you know, spend more time and make them far more awesome.

I know that graphic design isn’t people’s strong suit, yet lots of peoples are desperate to make free covers for their ebooks. I’ve been experimenting with making cover art for quite a while now (Wattpad is a great place to practice really awful covers until you get it out of your system).

Get on Amazon and search for books similar to yours. Fantasy? Romance? Sci fi? Chick lit? Whatever it is, look it up. I’m writing what I’m calling Regency Shifter Romance–basically it’s werewolves in a Jane Austen setting. Except this particular book features a dude who turns into a bear. Does Amazon have stuff like that? 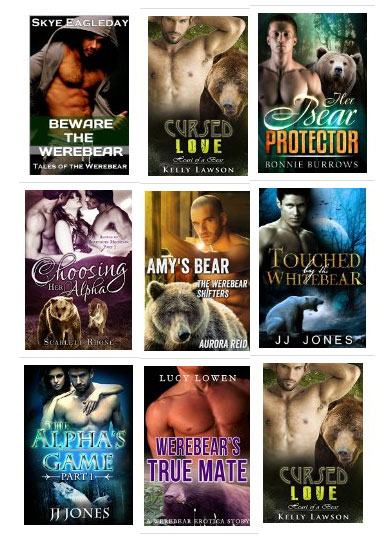 These were the top hits when I searched “werebear romance” on Amazon. Now, let’s break it down. 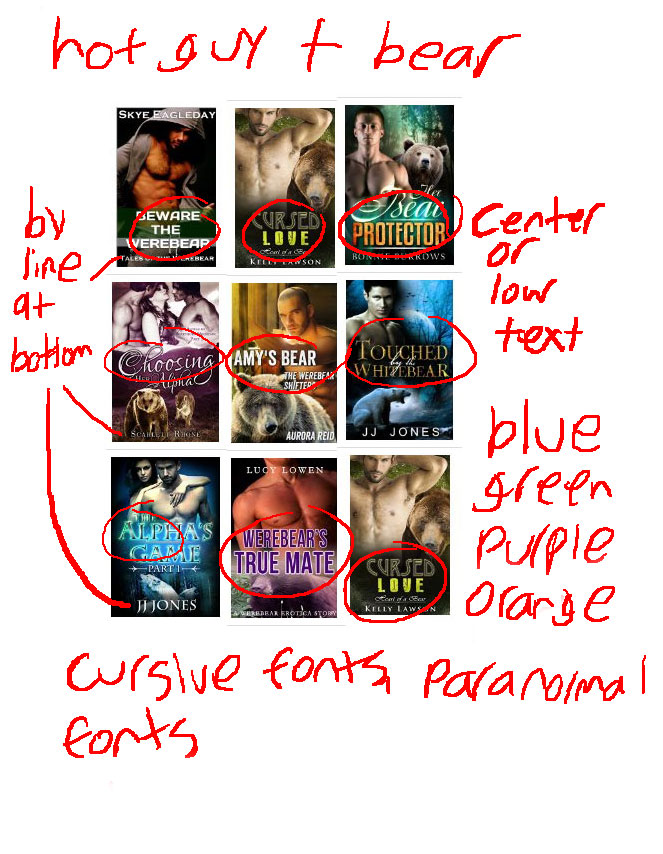 In case you can’t read my chicken scratch, here’s my observations:

Now I have an idea of what the genre expects for covers, I can go find the stock I want to use for mine. I get on DeviantArt and carefully comb through the stock photos, looking for unrestricted use, or free for use stocks. There’s really awesome stock that requires payment, but I’m cheap. I usually look for the really really old stuff, too. DA’s been around ten or twelve years, and there’s a crapton of art on there.

Here’s the stock I wound up with: 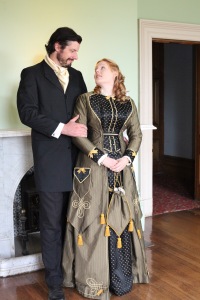 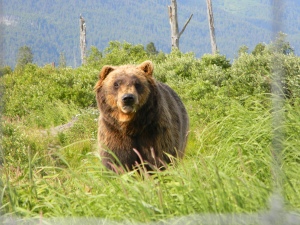 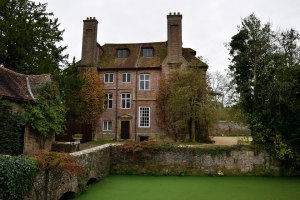 I dump it all into Photoshop and start rearranging. You can rent Photoshop from Adobe for 30 bucks a month, or you can use the Gimp or something else that’s free. The image editing for this art involves cropping, erasing, and moving layers. 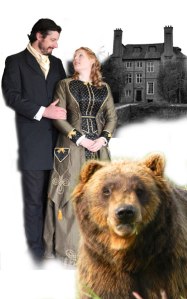 At this point, all I’ve done is erase backgrounds and move stuff around.

Now I drop a blue-black gradient into the background. 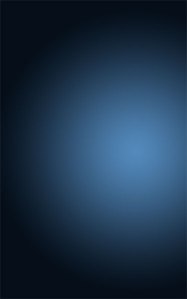 With the images on top of it, it looks like this: 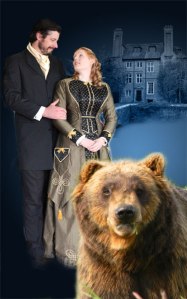 But Kessie! you cry. How did you make the house all blueish like that?

With the layer settings, of course! As you paste each pic into the image, Photoshop will stick it on its own layer. Just find the layer you want to make all transparent, and change this option: 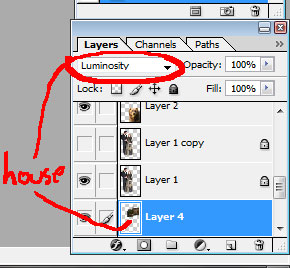 Now’s the point where I like to fiddle around with the title and byline, to make sure the images fit around them. The title has to be BIG, so it stands out in thumbnail, and high contrast. 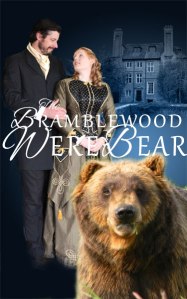 These fonts are Alex Brush for the script, and Gabriola for the print stuff. Ah, but it’s still kind of hard to read. Grab your airbrush and scribble in some black on a layer below the text. 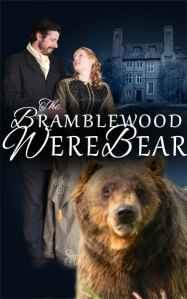 Much better. Now, the background is looking kind of dull and empty. A lot of those other covers use trees for the backgrounds to give a foresty impression. Were-animals always run around in woods. (Somebody needs to write one who runs around in deserts, or alpine tundra.) The picture of the house had a nice tree in it that I clip out and drop into the background. 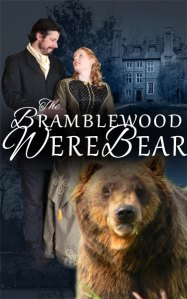 Much better texture! Now, since I’m lazy, I’m going to copy the bear and people layers, and set the copies to Multiply. And I’ll drop in a byline and scribble black behind it, too. 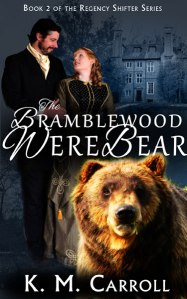 Looks decent, doesn’t it? I have some painting left to do–like I need to remove the grass on the bear, and airbrush the couple to make them look more painted. But it’s well on its way, don’t you think?

So that’s how you make a book cover. Mostly it’s looking really closely at other, similar covers and figuring how they put theirs together. Also, the right fonts is a MUST. I left out the hours I spent tinkering with the text, moving it, changing the fonts, and so on. I’m still not satisfied with the look on my byline, and I’ll change it some more.

I used this site to find great fonts for my genre.

Now go forth, and create book covers from stock! Always remember to respect the photographer’s stock use rules–pay or credit or whatever they require.

Anyway, here’s the step by step of how I did this pic.

First was the concept sketch.

Anyway, the concept was good, but the picture itself is kind of meh. So I rotated the camera.

Then I layered in some perspective lines to help with my (lousy) background:

I can draw buildings if I have reference. Unfortunately, here I didn’t use reference.

Then I inked Sonic and Shadow all nicely.

I even tried to use the thick-and-thin lines I used to love so much when I was inking by hand. Inking on a tablet just doesn’t feel the same. No friction between the paper and the pen nib.

Next some color on the background, so I’d know where the light sources were … 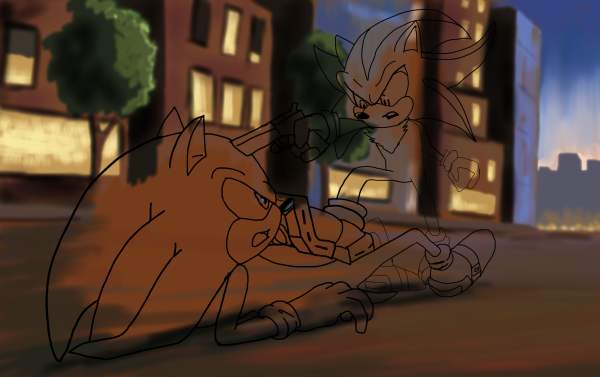 It wasn’t this blurry to start with, but I put some heavy camera-lens blurs on it to cover up some of my crappy contrast work. You can see it here, when I was midway through shading Sonic and Shads. 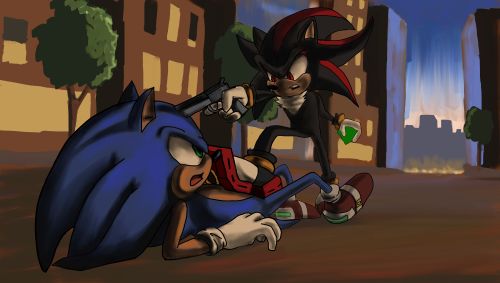 As you can see, there’s a lot of nothing on the right side of the picture that got cropped out.

See how shiny Sonic and Shadow get once their shadows and highlights are in place? 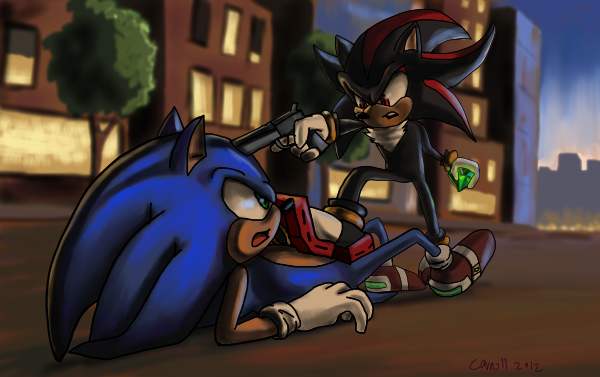 Then I smeared blue and purple airbrush all over everything to give it some atmosphere. 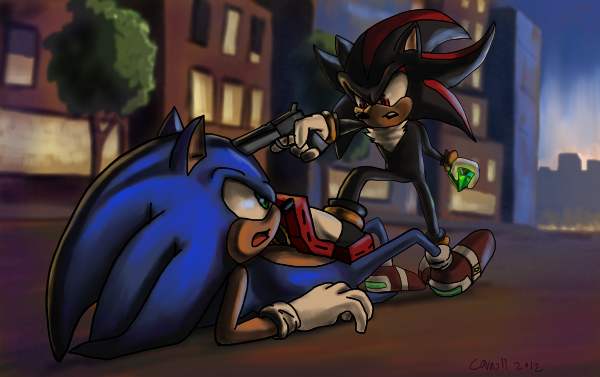 All done! I forgot how much I like working on pics that tell stories. I might do it more often. 🙂

Been working on a pair of commissions all week, as well as critiquing stories for my critique group. 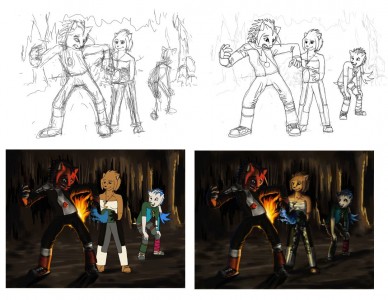 They were so different, they required completely different art processes. The cartoony one required inking, while the griffin got a color rough during concepting.

I’ve wanted to draw a Western-themed Sonic pic for a while. Deciding what to include was the tricky part.

Yesterday I had a pic idea flash through my head. I grabbed my mouse and scribbled it out.

But that wasn’t quite it, so I did this one next.

I liked that better. Whoever draws Sonic with a horse, anyway? And why would he need one when he runs so fast? That’s the hilarity of a western-themed Sonic game.

I got out my tablet and refined it a bit.

And with a sigh I went in search of some reference for a horse’s head at that angle.

I also looked up dusters. This makes my third pic this year of someone wearing a leather duster. They’re just so awesome!

It was getting late and I wanted something presentable, so I slapped some color on it and called it good.

But there’s a few things wrong with it, like Sonic’s arm and the positioning of his spikes. I’m going to refine it a little tonight. Also I want some kind of a bloom effect around the edges, like they’re standing in bright, hot sunlight. I’ll have to experiment.

I wanted to brush up on my figure sketching tonight. I did that rough little comic last night, and my figures were pretty bad. So I went sniffing around my favorite stock archive on DA, and lo and behold, she’s updated it. And what’s more, she had a nice tutorial on the basics of figure drawing. So I used it and drew some figures.

Also, I realized that I need to keep up on my Sonic sketching, because my cartooning skills have slowly been deteriorating the longer I don’t use them for awesome. And hey, you can use figure sketching for cartooning, too.

If I just do a few of these every night, my Sonic art will be back up to awesome in no time. Give or take a month or two.

Worked on this for a while tonight and got it mostly done, I think.

Here’s the black and white layer.

Here’s the color layer on the fox. It’s subtle.

And then the liberal amount of blue airbrushing for the background.

I think the fox’s coat needs another layer of lighter hairs and some snow sprinkles. And I want some red holly berries. Think I could get away with some kind of red berries, because pine trees totally have those?

It’s occurred to me that I haven’t actually finished any pics since September. So I’m gonna draw my three-tailed fox, Dusk, all curled up in the snow with pine branches and stuff. All Christmasy-like.

…and here’s the grayscale rough.

Working out the composition still, but I think I have an idea of how I want it to go.