Sorry about that, folks! Yesterday a malicious script got on my site and planted a redirect to some gross site. I’ve cleaned it off, and I’m going through my scripts to make sure this doesn’t happen again.

Sorry for any trauma you might have experienced while trying to reach netraptor.org!

Today I had some of the neighbor kids over. They’re three girls, about 14 and under. It was hot outside, so I invited them in to color pictures and play with legos, which they did for quite a while.

After a while, they mentioned that my son had taken a book of nursery rhymes to their house and left it there. They said they’d bring it back, but it was in the youngest’s backpack, because she’d taken it to school for show and tell.

I sat there and thought about that in growing sadness. They don’t have any books of their own, so they take a borrowed book to school for show and tell?

I told them they could keep the book.

Around our house, books are a precious resource. I never can understand people who don’t give books to their kids. Don’t they want their minds to work? Or are they just oblivious? I don’t get it.

I’m going to give them some of our extras. Maybe they’ll have more to take to school.

Why are they called the dog days of summer? Because you work like a dog? Or because its so hot, the dogs lie around and pant?

Either way, that’s been us this week. Between watching the neighbor boy and making jam (and recovering from a cold), it’s been go go go. 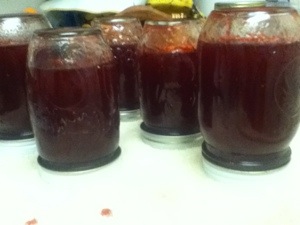 Delicious raspberry jam! I strained out the seeds first, which took much longer than I expected. It became an all day project. Then we’ve been eating it on everything–yogurt, sandwiches, pancakes.

It’s in the middle of that laughable heat wave that Phoenix is known for. Yesterday I was sitting on the porch as the sun went down, and the National Weather Service informed me that it was 115. I only noticed it was that hot because I sweated through my shirt before I realized I was uncomfortable.

My writing mojo had burned out (due to the heat?), but I’m trying to exercise more, and it helps my mind so much. When I’m inactive, my brain goes blank a lot, and loses its train of thought. When I’m exercising, that doesn’t happen. It’s kind of scary.

And now I must dash to the store before it gets hot, or the food will spoil in the car.

Edit: Haha, one of my friends snapped this on Facebook:

Just some pics of the babies today!

Yesterday the Internet erupted in roars of nerd-rage. It seems that Thor is now a woman. 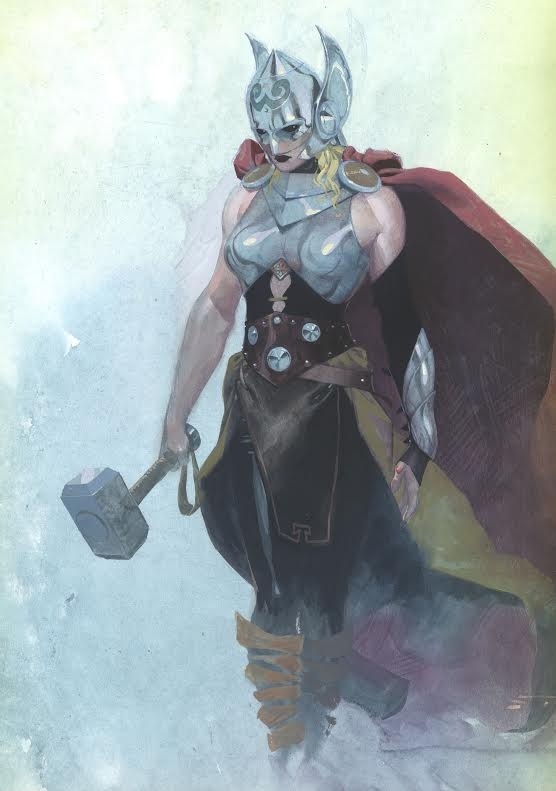 Apparently, in some bizarre nod to the feminists, Marvel has decided to change the gender of one of the Norse gods.

This is somehow a victory for feminists, who are crowing about how progressive Marvel is being.

But really, who is it a victory for? Let’s break this down.

Do girls want to look at pictures of large-breasted heroines wielding lightning?

Will changing Thor into a chick attract more girl readers?

Probably not. Most girls I know were swooning over movie-Thor because he was a hot guy.

So, this isn’t really a feminist victory. They’re perpetrating more objectification of women.

Supposedly the character will remain the same, so making Thor a girl changes exactly nothing. Which makes us ask, why the gender change at all? Winning points with people who don’t read comic books?

I personally think its so they can pair up Thor and Loki.

It’s monsoon season in Arizona. It’s cloudy and hot and muggy. The cicadas are going full blast, and the pool is closed half the time because of extreme overuse.

The kids have caught their usual midsummer cold. You know in the winter, how people huddle together indoors and share germs? Same thing when it’s so hot. At least it’s not ear infections!

I’m gearing up to start school in a few more weeks. My mom loaned me the first volume of the Mystery of History, and I’m so excited. This is the year I’ll get my girls reading, and things will be so much more fun.

I’ve been reading about the Charlotte Mason teaching method. Aside from narration (repeating back something you learned), which I think is cool, there’s this other thing I noticed. For younger kids, you do everything in 20 minute chunks. 20 minutes of math, spelling, etc. It’s like you harness their ADD!

Also people say over and over that if you do nothing else, read the classics aloud. I’m pondering which ones to start with. I have my favorites, but some are harder than others to read!

…as made up by two screwball guys, who manage to get it totally right.

Part 2 is here (with the shocking finale!)

Warning: Don’t drink anything while watching.

Here’s some pics from our Fourth of July! We spent it with the clan, and boy, I wish I’d taken more pictures!