Just a sketch of Revi, heroine of Wraithblade, the book I’m working on.

Babies don’t talk in words. They talk in emotes.

Me: do you want to play on the floor?

Me: Aw, do you need your mama?

In no particular order, they are:

6. God’s continued graciousness to me

7. The thrill of a good story

8. A future filled with good things

9. The small lives of birds and insects that are so entertaining

10. Reading books aloud that I loved as a kid and now get to share with my kids. 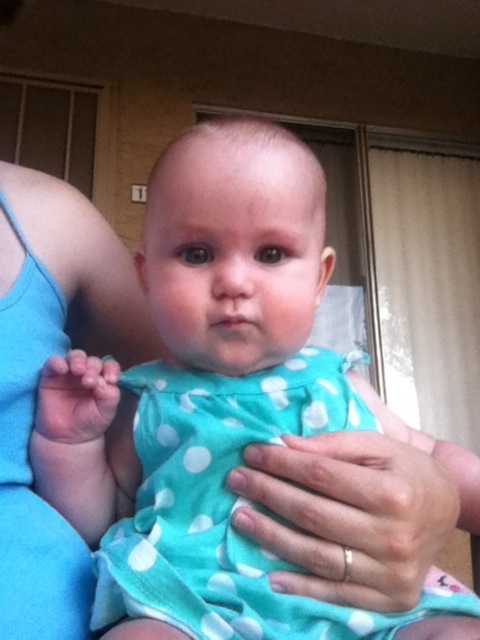 The other day I was hauling trash out to the dumpster, and I saw a bird I’d never seen before.

Our dumpster is way the heck in back of the apartments, and there’s a nice view of the mountains and deserty trees on the way. I always enjoy the hike.

Anyway, there’s a power pole out there, and there’s usually some doves or mockingbirds hanging out on it. But this time there were two birds I couldn’t identify. They were the size of mockingbirds, and made a twitter like mockingbirds, but they were shy. They hid behind the pole and made this rawr, rawr, rawr sound. I’d never heard that before.

I stood there and watched them with the trash can in my hand. The light was behind them, so I couldn’t see any distinguishing field marks. Then one flew down to check out the dumpster.

Mostly brown, white spots. A lot of spots on the tail.

I dashed inside and typed the description into Google, along with “desert southwest.”

Cactus wren! I even listened to their calls, and it was the same sound.

This makes me happy. This is the first new bird I’ve identified since we moved here. 🙂

My oldest daughter’s birthday marks the last of the kids’ birthdays until November. So we celebrated by visiting one of the little amusement parks here in Phoenix: Encanto Park.

Here’s the pics my hubby snapped, since I forgot my camera: 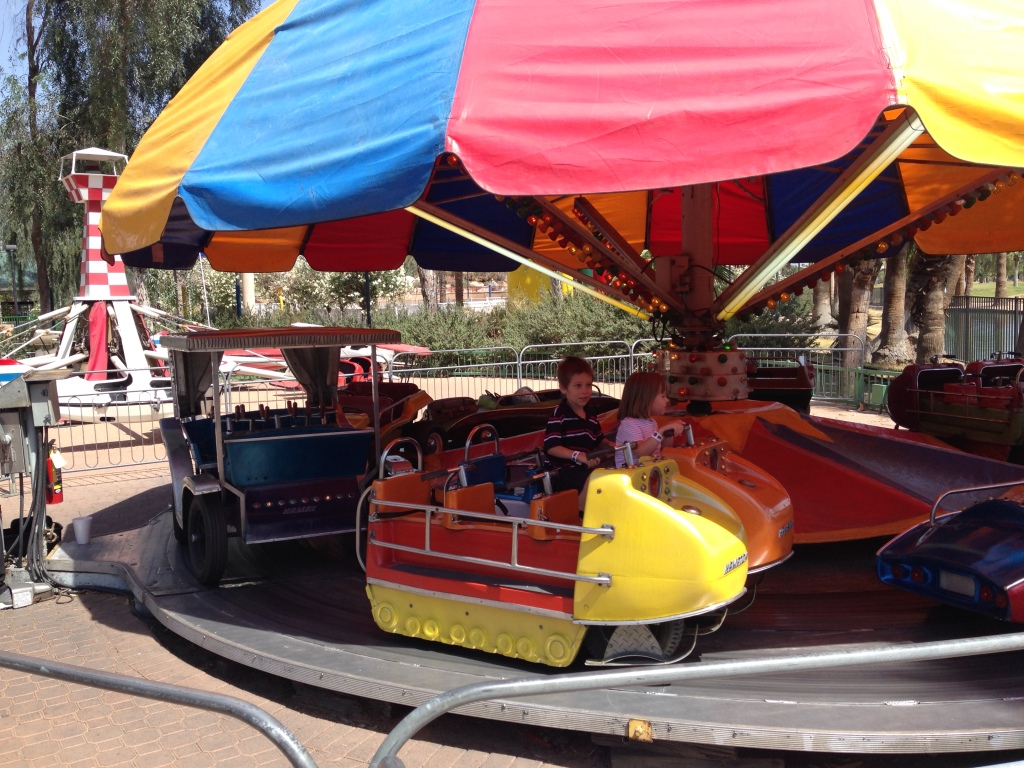 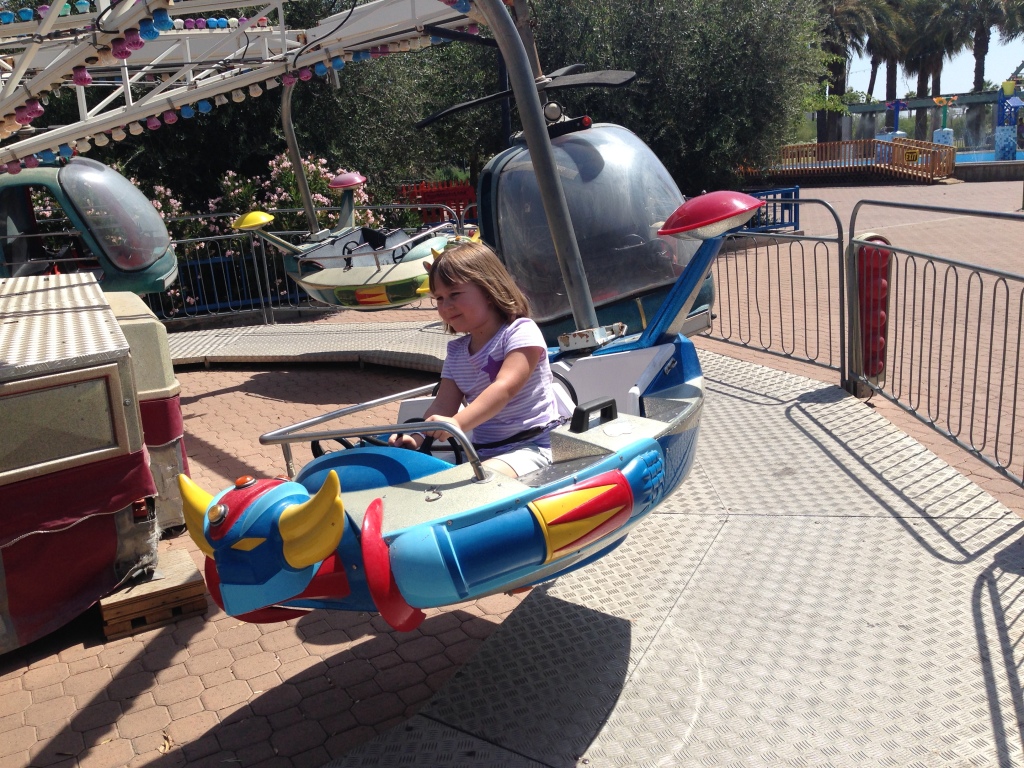 It was about a hundred degrees, but fun was had by all. We’re hoping to go again sometime when it’s not so hot. You know, like next winter. 🙂

I’ve been developing a story idea that has to do with these craggy, rocky space dragons.

Naturally I had to draw one. I think I might matte-paint some mountains onto his back just to get the craggy look I want. Also the galaxy needs more cowbell. Lots more.

I’ve been trying to write a blog post all week. But every time I try, my little helper decides she wants attention.

Halo is a videogame series that is more or less space opera. Aliens, space ships, battles, explosions, the fate of the universe, supersoldiers, all that good stuff.

Ender’s Game is more or less the same thing, except confined to one training facility for super-genius tacticians.

Somebody made this movie, Halo 4: Forward Unto Dawn, and it’s free on Youtube. Here’s the first 20 minutes if you want to give it a shot:

We just watched it, and boy oh boy. Here’s the official summary:

Thomas Lasky came to Corbulo Academy of Military Science with his mother and brother’s impressive military careers hanging over his head. Haunted by ghosts from his past, he has serious doubts about the war he’s expected to fight. As fellow cadet Chyler Silva tries to help him find his place at the academy, tensions with other squad members approach the breaking point.

And then they get attacked by the Covenant (aliens).

We finished watching it, and I immediately ordered the first novel, The Fall of Reach by Eric Nylund (which is every bit as good as Forward Unto Dawn.)

Lasky and Ender are similar: they think too much, they care deeply about people, and they have baggage. But while at the end, Ender is shattered and becomes a prophet, Lasky becomes a hero.

If you like Ender’s Game, and the whole military sci-fi premise, give Forward Unto Dawn a try. At the very least it’ll entertain you.

It’s also kind of fun to see Susan from The Lion, the Witch and the Wardrobe shooting stuff. 🙂

While the world of Ender’s Game reduces the alien invasion to a big misunderstanding, the world of Halo has really bad aliens. Humans have colonized lots of planets, and the soldiers are being trained to quell insurrectionists–until these aliens, the Covenant, show up and start destroying human planets. Humans then have to band together to fight a desperate war against the Covenant.

It’s great fun. And it’s very character-driven, which for me (I’m not really a fan of loads of worldbuilding and cardboard characters) was a plus.

I wanted to draw a ceratosaurus, so I went looking for reference pics.

A ceratosaurus is a relative of the tyrannosaurus, only with spiky doodads on its head.

I muddled around with different kinds of head crests in my sketch, but I couldn’t find anything that looked, well, un-stupid. Then I went hunting for other creatures that had massively weird skulls, but the creature was alive. 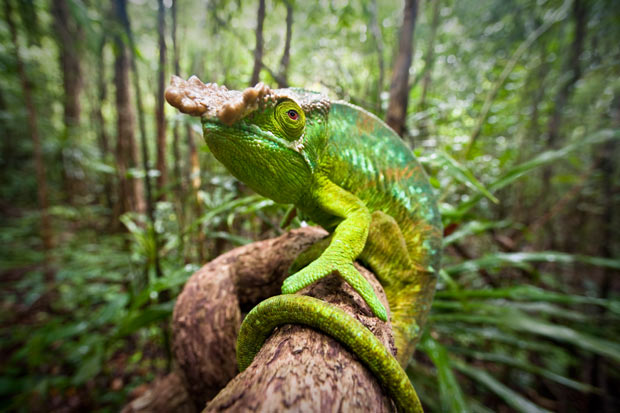 Fisher’s Chameleon is just as weird-looking.

Anyway, compare the skulls and the lizard. The horns on his nose are more or less the same as the skull. They’re just more rounded and soft-looking. So I tried to do the same thing in my sketch. 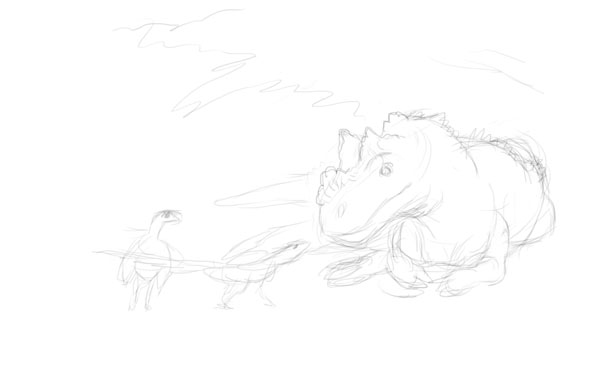 I think that the females probably had smaller crests than the males, since these chameleons do, too. I’m going to play with it some more.

Also, I like drawing predator dinos in relaxed poses. We draw lions and tigers in friendly, social poses all the time, so why do dinosaurs get the short end of the stick? They were just animals.