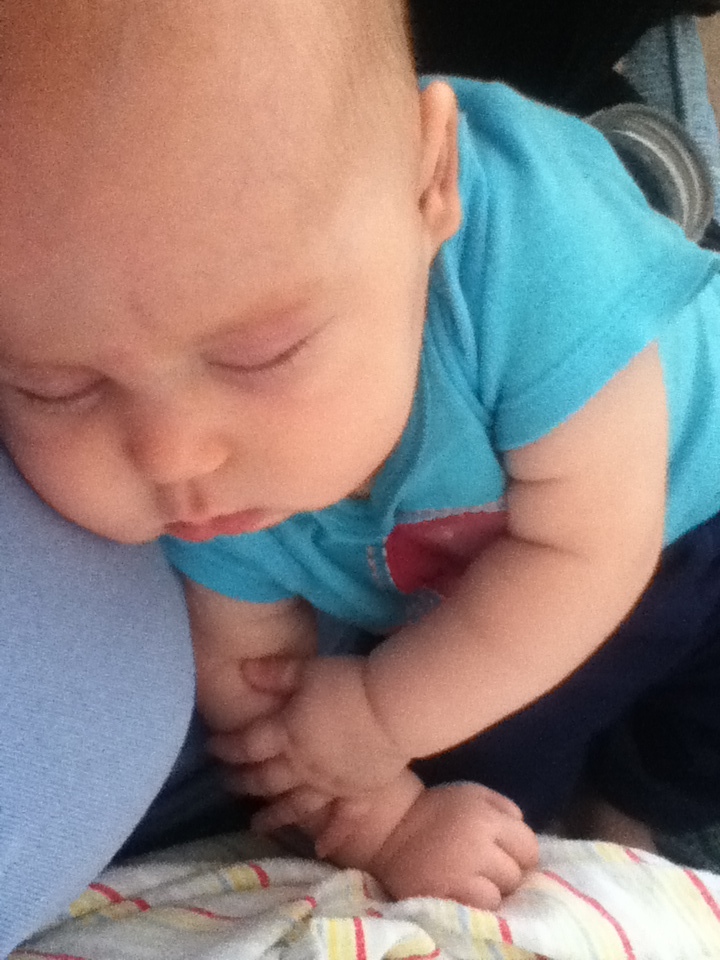 I have a sleeping baby in my lap. Aren’t her little hands adorable?

I’m hitting homeschool burnout. I think February is just the burnout month, generally. Holidays are over, summer vacation is ages away, and school has stopped being shiny and fun.

My brother mentioned to me in an email, what would have his storytelling skills been like if he’d been allowed to play role playing games like Dungeons and Dragons at a young age? Which got my wheels turning.

DnD involves math and reading, the two things we’re really working on right now. Could I put together a simple system that the kids could play, that would make math and reading fun and almost unnoticeable?

I came up with a DnD fourth edition Super Light. Just the skill modifiers. A d6 for damage and a d20 for interactions. Anything above a 10 succeeds, anything below it potentially fails.

We built a Lego town and used mini figures for our guys. The first adventure, they kept skeletons from invading a town. The next adventure, they had six NPCs, one of which was a monster in disguise. They had to gather the ingredients for a special cake that would reveal who the monster was.

Yes, the cake exposed a lie. 😀

Now I’m wondering if I could do history this way. We could play the Puritans at Plymouth, and have a FarmVille mini game. And they’d get to interact with Squanto and Bradshaw and Miles Standish and all those other nifty historical guys.

I’d have to do a bunch of research, of course. But hopefully this would make our history reading a lot more fun.

It also helps with burnout. I don’t think we could do it forever–coming up with these adventures is hard work!–but it’s a nice change of pace.

Here’s the youngest two all snuggled up in the crib together. 🙂

Yesterday we took the kids to a movie theater for the first time in their lives. Since they’re 6, 4, and 2 (and an infant), we figured they’d handle it okay. Besides, it was the Lego Movie. What’s not to like?

I think mostly they were overwhelmed. When we opened the door and walked into our dark theater, the kids lagged back, afraid to go in there. Fortunately Daddy led the way. The only spot with six seats together was the top row.

So we hoofed it up the stairs with the kids tripping, even with the lines of lights on each step. By the top, they were very uneasy–they knew they were high up, but they couldn’t see!

We fumbled into our seats and watched the movie. Everyone sat nicely and the baby obligingly slept through the whole thing. (Awesome movie, by the way.)

Once the movie ended and the lights came on, they handled things much better.

Then we came home and built Legos for the rest of the afternoon. 🙂

I’ve come to the conclusion that Christians shouldn’t write speculative fiction at all. Especially not fantasy.

Pitchforks rattle in the distance, so let me explain.

I’ve been circulating around the Christian spec fic community for a couple of years now. Like any community, it has its sticking points that the community bickers over.

Magic or no magic?

If C. S. Lewis used Aslan to represent Jesus, I can use The Generic Christ Figure in MY book!

Wizards are BAD and EVIL

Christians should only read things that edify our souls in Christ! Pagan authors are doubtful at best and dangerous at worst! TRUTH!

Now, go into a bookstore/library. Pick up a random fantasy novel and read the back cover. It will involve:

These things are standard genre tropes. It’s the same as walking into the mystery section. There you will find:

Now, imagine if Christians were whining, “Reading books where people die is against my principles! I want to write murder mysteries with no murder, no weapons, and no sleuth!”

It begs the question, “Then why are you trying to write this genre at all?”

That is the question that continually mystifies me.