I was trying to think why I seemed to have no art mojo this past week. Then it dawned on me.

I’ve been helping my hubby paint his War Machine models. 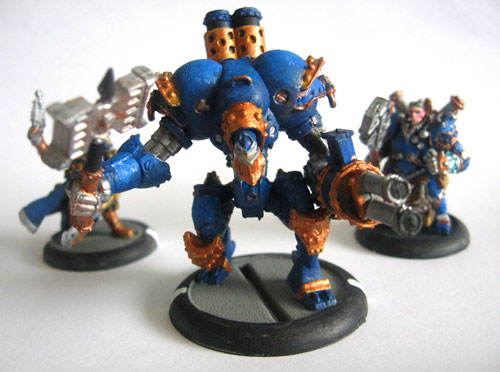 These dudes are only an inch to an inch and a half tall. I’m having to remember all of my nifty sculpture painting techniques, like antiquing and dry brushing. They’re very shiny in person because of all the bronze and silver paint. I’m even mixing the blue with pearl paint, so the blue has some sparkles in it.

My art teacher always laughed about how I loved sculpting and painting teeny tiny things. Well, these models are giving me a run for my money. See the tools in the first guy’s tool apron? Each about the size of half a grain of rice. Try hitting that with an ol’ fat brush.

I had an idea lately for a story with the Fae in it. (Too much immersion in Dresden and Grimm and other fantasy type media, I think.)

Anyway, as I started researching the Fae and Fairyland and Faerie, I remembered this old idea I had once. Let’s see if I can explain it without sounding too oddball.

Hundreds of years ago, before modern science, people lived in fear of fairies. That’s why there’s trees and bushes and charms and herbs and cold iron and all kinds of things meant to ward off fairies. If a fairy caught you, they’d drag you off to fairyland and you’d never be seen again. If you did get back, you’d be forever changed. Right?

It’s almost as if there’s some kind of actual malevolent force out there that interacts with human beings sometimes. Evil spirits, demons, whathaveyou. And people called it the Fae and lived in terror of it.

Fast forward to modern day and modern science. Nobody believes in fairies anymore. However, we do believe in aliens. Beings superior to humanity who live on other planets among other stars, and who, for whatever reason, have an inexplicable interest in Earth. I’m talking about UFOs, alien abductions, that sort of thing.

Aliens who take people away on their space ships, and when the people come back, they’re forever changed.

Their looks haven’t even changed all that much.

But I think the malevolent force behind them hasn’t changed. It still interacts with humans and does bad things to them. As we learned more about science, this malevolent force had to withdraw elsewhere that we don’t know much about–from nature out into the cosmos.

All my own conjecture, of course. I’m just reading all these old stories about the fae and noticing how similar they are to alien abduction stories ..

Some concept sketches of Aesti tonight. So far he’s a cross between the Aestivalis robot from Nadesico (his namesake), and the robot suits from Section 8. He’s a powered robot suit that the pilot got killed in, and the computer recorded his soul over the AI. So he’s a giant robot suit dude with nobody inside. Totally anime, right?

Anyway, he’s a blast to write. No matter what the topic of conversation is, it always devolves into Aesti speculating as to whether he can blow stuff up. He’s also developing a crush on the heroine, which troubles him, since he’s, you know, dead and stuff. Character conflict!

Messed with this a bit more today. Mostly with the eyes, and punched up the orange in his complexion.

Then we discussed how werewolves and vampires are becoming “tame” now. You have friendly, remorseful vampires seeking redemption. (Of course, even in Twilight, the bad vampires are still really bad.) Werewolves have stopped being Monsters of the Night and have become friendly pack animals with family hierarchy, because we know more about wolves than we used to.

(And wolves don’t hunt down and eat people in sleighs anymore.)

Zombies, though. There aren’t any friendly zombies. In fact, zombie apocalypse has become such a cultural thing, we have counties in Florida with their own zombie plan.

Isn’t it interesting that in a culture obsessed with physical beauty and staying young, our cultural horror is about the decay and rot of that same body?

I’m really enjoying reading The Kill Zone, a blog by and for mystery and thriller writers. On Sundays, James Scott Bell has articles that usually include at least one good writing exercise. Today there were several, but this one intrigued me the most:

A question Don likes to ask in his workshops is, “What is something your character would never ever do or say?” Then, find a place for the character do or say that thing. Or at least think it, showing a ferocious inner conflict. Wow. Try that some time and then pick up the pieces of your head.

I started thinking about what each of my characters would never do, and it was actually really revealing about each of them. You can’t define a square without edges, right? Seems I only ever plan out one edge. Finding the other edge of the square was highly interesting.

For example, take Eddie Valor. He’s a retired guitarist for a fantasy metal band (think Nightwish). He’s laid-back, easy going, sensitive, and almost never loses his temper. (Which is good, because the other characters all fall somewhere between C4 and nitroglycerin on the volatile explosive scale.) He’s the one person who doesn’t lose his cool in a crisis.

One thing he would never do is get angry enough to try to kill someone.

Another thing he’d never do is harm an instrument, especially a guitar.

Which makes me wonder what would have to happen to bring him to both of those points. Can you say ‘conflict’? 🙂 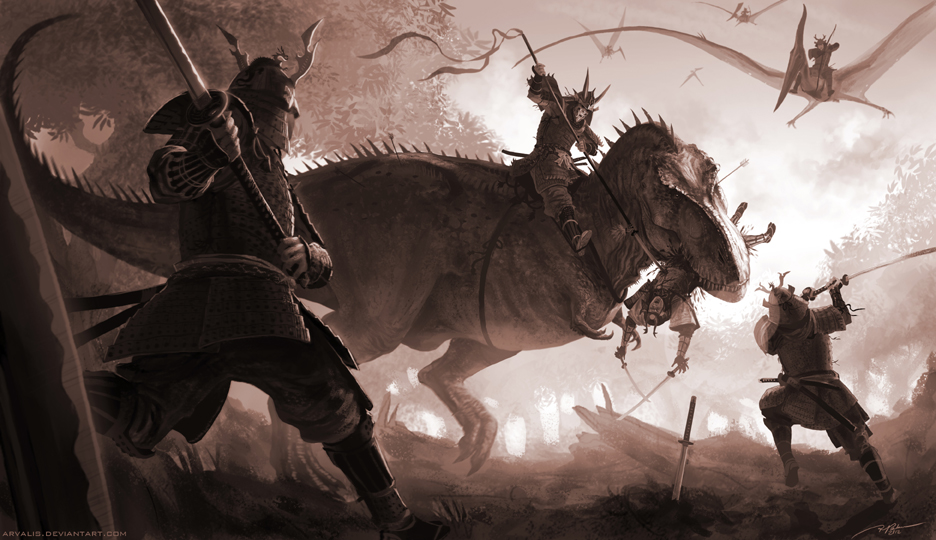 T-rex vs. Samurai, by arvalis

The epic of this picture … the samurai, the skull-faced dude riding the rex, the pterodons, and the delicious sepia tone … Wonderful!

Just a quick, fun portrait tonight. I’ve been watching Grimm, and Silas Weir Mitchel’s character Monroe is the best part of the whole thing. He makes a really great wolf. Check out those eyebrows.

Well, it’s more or less done now. It’s to the point where I’m going to fool with it until I ruin it, and I’m ready to work on something else.

Also, the gun didn’t work until I painted it pink. Now it looks great. Hee.

Animals are so easy compared to human faces and wrinkled shiny leather. You can tell what I always drew in art class. :-p 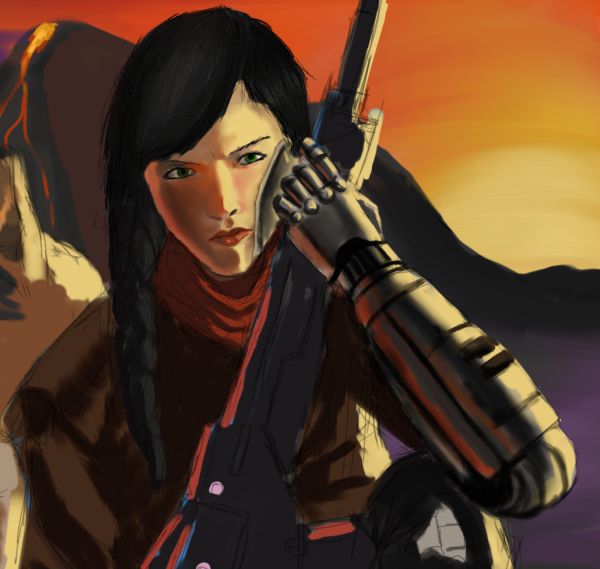 I remembered how much I love shading metal tonight. After fiddling with the girl’s face, looking up skin tones, erasing stuff and redoing it over and over … switching to that robot arm was like pulling out a giant Snickers and eating the whole thing in three bites.

Now I want to go draw some robots when I’m done with this. 😀