I was reading a site about OOPARTS (out of place artifacts), and I ran across this entry here:

Did Ancient Americans Ride the Parasaurolophus Dinosaur?-Or Did They Just Exaggerate the Size of Their Sheep?

There’s an old book where this guy went around and recorded a lot of petroglyphs. I’d love to get my hands on it just for the artwork in it. Anyway, one of the recorded drawings was this:

Click the article for all the arguments about if being a sheep or something. Anyway, one of the things I thought was interesting is that the artist has shaded in the head and legs. That’s a pretty basic coloration for any animal (look at horses and elk), and hey, any clue to what colors dinosaurs may have had is a good clue! (Like the one where those scientists scanned the feather data from that one fossil bird and found that it was black with white wingbars and had a red crest).

Anyway, I’m taking a stab at coloring some parasaurolophi that way. (Parasaurolophuses?)

Over at Inspiration All Around Us, this month’s challenge is a dull pic of a dull tree reflected in a dull pond. I decided to take a quick whack at it to see if I could make it a little less dull.

… I couldn’t. Notice I put the main tree smack in the center. Ick. I’m not going to submit this as an entry, but it was relaxing to do all the scribbling.

So relaxing, in fact, that I decided to conceptualize one of my husband’s fun beasties.

This is Ben (think Big Ben) the time elemental. He started life as a pet over at GaiaOnline, but stuck around in our stories as this little lizard guy who jumps around in time as the mood takes him. He mostly eats time debris, but he adores shiny things, so the only word he can say is “Shiny!” He’s always swiping stuff and hiding it in his time-displaced lair, so they’re hard to get back.

If somebody actually hurts him, though, Ben fast-forwards his own timeline and grows into a gigantic, mature time-elemental dragon. With lots of clockwork bits and wings. I modeled him after a skink, because skinks crack me up with their long, fat bodies and teeny tiny legs. They eat bugs, and I wanted Ben to have a non-predator look to him. Small teeth, skinny jaws. He won’t mess you up by biting you, he’ll just screw with your timeline. Maybe just erase you entirely out of pique.

This is a skink:

I’ve been playing World of Warcraft lately, and I have to say, the artwork in the Cataclysm expansion is phenomenal. Take a look at some of these screenshots I snapped last night.

And that’s with all the graphics turned off on my ancient computer, too.

So yes, that’s where I’ve been. Enjoying WoW and not doing anything remotely creative. :-p

I decided to pull this out again and make a serious attempt to finish it. This is how it looks now.

Here’s the detail of the girl: 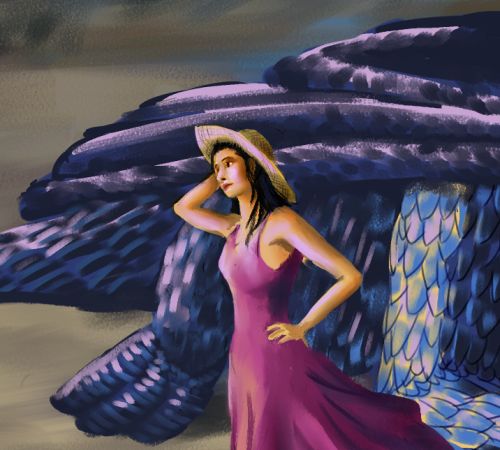 I just can’t get her dress to look right, but I can’t find any reference for material billowing in the way I’m trying to draw it. I’m almost to the point of putting on a similar dress, standing in the wind, and having my husband photograph me, just so I can see what the material is doing.

And then there’s the problem of water. I played with it for a long time. The artists blogs I read all talk about the importance of defining your edges, especially in the final stages. Find your edges! I’ve finally figured out that that means making the light areas next to really dark areas, and try to cut out the “midtone mumbling”. It does make the picture pop, doesn’t it?

Anyway, it’s not quite done yet, I’m still mumbling in the midtones in the background hills quite a lot, and the fire doesn’t look in focus yet. I’ll keep playing with it.

What, I have an art blog? And, like, I’m supposed to draw stuff from time to time to stay in practice? When did this happen??

Anyway, I sat down to draw and nothing came out for a long time. I haven’t touched a drawing implement in 11 days and never thought about it at all. Eventually, I doodled Silver.

I default to either Sonic characters or raptors, because they’re easy.

I’ve been trying to write a bit lately, and when I need to think about characters, one of the best ways for me to do that is to draw them. Drawing takes a while, and I get to contemplate things while I do it.

Anyway, I have to be in a certain frame of mind to write Michelle and Indal (the werewolf), so this sketch was an attempt to get into the right frame of mind. (Doomed romance is tricky to write.)

Here they sit, on the hood of Indal’s Mercedes, discussing their future. Although technically Indal would have to be in human form to discuss anything, since I’ve made a point in the story that he can’t talk when he’s the wolf. This is artistic license.

I doubt I’ll color this pic, because the front of that Mercedes is a pain to draw, and Indal’s legs don’t look right. He’s supposed to be leaning back, but because we’re looking at him head on, a lot of foreshortening comes into play, and I’m not sure I’ve got it right.

Ah well, tis but a sketch.

Sphinx by *GENZOMAN on deviantART

This is the sort of sphinx I’d love to be able to draw. 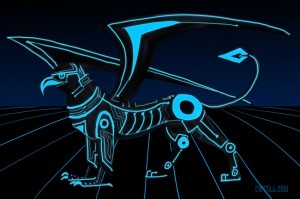 Well, there he is, all finished.

This would have been easier if I could draw a line that was marginally straight. This is especially apparent in the far wing, where the line is wobbly. I erased and drew and erased and drew. Things weren’t made easier by the fact that I had anywhere from 1 to 3 kids in my lap at any given time. They love watching me tablet-paint. Jostled elbows do not for straight lines make.

I know there’s a line tool, but I can’t make it draw non-vector lines, and I didn’t want to mess with wading through the help files to find out how. I imagine this would have looked great in Illustrator, but that didn’t occur to me until just now.