I was trying to think of something to draw. I looked back through my art from a year ago, and I seemed to churn out my most artistic works when I was asking myself, “What have I never tried to draw before?”

A waterfall came to mind. I’ve never successfully drawn or painted one. Google image search is, shall I say, “awash” in waterfalls.

But a waterfall by itself isn’t much of a subject. And that one Streams in the Desert came to mind:

Two painters were once asked to paint a picture illustrating his own idea of rest. The first chose for his scene a quiet, lonely lake, nestled among mountains far away. The second, using swift, broad strokes on his canvas, painted a thundering waterfall. Beneath the falls grew a fragile birch tree, bending over the foam. On its branches, nearly wet with the spray from the falls, sat a robin on its nest.

The first painting was simply a picture of stagnation and inactivity. The second, however, depicted rest.

And I wanted to try my hand at that second painting.

Here’s as far as I made it tonight. It all needs work, of course, but for now I’m just establishing values. I’m hung up between doing a waterfall with the water still in chunks … 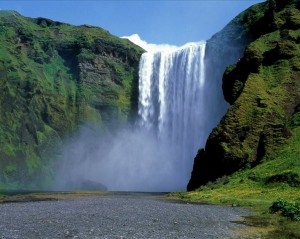 …or one with the water all blurred into a curtain. 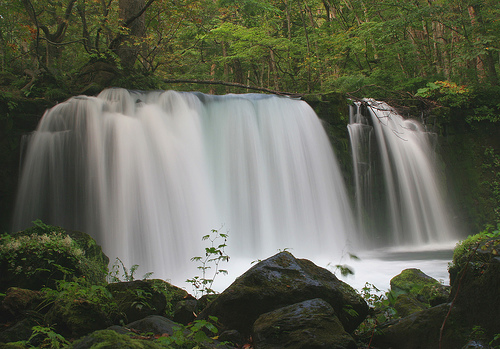 Either way, it still needs work, and work I shall. I really prefer painting from reference whenever I can. Leaves room for artistic interpretation, you know?

I drew a circle, stared at it, started adding on, and before I knew it, it was this fairy dude (chick?). And he’s definitely a fall fairy.

You know, if I ever want to get even adept at drawing horses, I should practice them more than once every six months.

This is based on one of Pioneer Woman’s wonderful Mustang shots. I just loved the bleached orange in the ends of her mane. It adds such a lovely color accent to the black and white.

Anyway, I know there’s a ton of flaws and stuff, but it was just practice.

I’ve been tinkering with my story of Charr and Dusk a bit more. You remember them; the little girl and the grouchy, ugly dragon.

Anyway, Dusk can already change between a human and a fox because she’s a kitsune and that’s what they do. But Charr, the dragon, hates humans and can’t shapeshift at all. So when he has to be disguised as a human for a brief sojourn on Earth, he makes a really ugly one.

He looks like some frightening ex-con (which he technically is) who is part ogre. And the human characters think that’s what he is, just by default.

Well, hey, if Liv Tyler can have Steven Tyler as a dad, then the concept of an unattractive man with an over-the-top-cute little girl is not only realistic, it’s somewhat hilarious. As long as he’s not like a chester molester or anything.

I had this picture in my head of Shadow holding Blaze hostage with a gun to her head, for some reason. Upon thinking about it further, I decided to add Silver in there, holding a Chaos Emerald. So we know why Shadow’s willing to bother taking Blaze hostage, not knowing that she’s practically a walking fire elemental.

And now with ink …

I’d seen an interesting pic on DA somewhere that used diagonal lighting across a face, and it made it really pop out and be interesting. What struck me most is that light travels in a straight line across a solid object, straighter than I’d thought. So I set about trying to duplicate that effect.

Rough background with some basic color showing where the edges of the light beam ended.

I wanted some kind of a brick wall behind them, so I poked around in Painter’s Image Hose library, and came up with this in about ten seconds:

Just set that layer to Overlay …

Perfect! I thought about adding some graffiti to it, but later decided that it would distract from the standoff between the characters.

Time for the shading.

And last but not least … the magic!

All done in about two hours, which is pretty quick for me. Working with such heavy shadows lets me cheat a lot. I remember why I love doing pics set in the dark with small light sources. 🙂

James Gurney, over on his blog, always has really interesting art exercises. I just had to try this one.

What you do is, hit up mapcrunch.com, which takes tons of interesting pictures from Google Street view, of 18 different countries. You hit Go and it randomly gives you a picture from a random spot in a random country. It’s a great way to see non-touristy places without getting lost from your tour guide, or ever even leaving your chair.

Anyway, Gurney recommended setting a timer, picking a landscape, and drawing it in 10 minutes or less at the size of a postage stamp.

Left to right, top to bottom, it’s Norway, Portugal, Ireland, and New Zealand. I did have to skip a few that it gave me, which were things like Wall O’ Trees or Empty Field. And I did pan each one around to find the most interesting angles.

And I found that I suck really a lot at landscapes. These really forced me to see what I was looking at. As an artist, you really have to train yourself to see and observe, so you can hold it in your mind’s eye and move it to the page. And I’m getting rusty at it. This really showed me how flabby I’ve gotten.

I think I’ll do some more of these. They’re like peanuts. 🙂

Just practicing my cloud structure a bit. I suck at doing really structured-looking thunderheads, so this one I picked a thunderhead off Google and paid close attention to the structure. 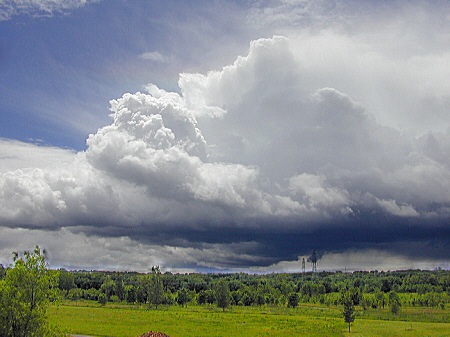 As you can see, they have a really firm structure to them, with the big thunderheads in the center with the clouds lower down supporting them. The trouble is, I have trouble identifying the shapes in clouds like this, so I can’t keep them in my head long enough to transfer them to a painting. So my clouds tend to wind up as weird, vague shapes.

A reader commented on my last blog post about how I make my female and male griffins look different.

Actually, I cheat. Here’s how:

I just slap the appropriate species color over the design, and to quote Homestar, “No one will be the wisor.”

In cartoons, men always have small eyes and larger, more square features. Women have big eyes, and tiny noses and mouths, and their features are rounded. Mimicking those rules in a “realistic” drawing, no matter how faintly, will get across an idea of gender if your viewer looks at it long enough.

I’ve had this particular griffin concept in mind for a while, and thought I’d get him out on paper (digital paper)? where I could look at him.

He’s a foil to my griffin Caligo, who is peregrine falcon/snow leopard. She looks like this:

He, on the other hand, is aplomondo falcon/tiger, and looks like this:

I don’t see a lot of tiger griffins, I guess because classic griffin is lion/bald eagle. But you’d think tiger would be the next logical step.

Anyway, for some reason, because of his particular animal mix, I want to name him Alfonzo. And his personality is already “jerk”, and I know nothing else about him.

I also thought it would be fun to use an aplomondo falcon, because they’re similar to a peregrine, but brighter-colored. 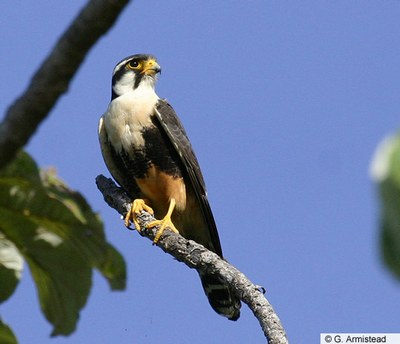 Aren’t they pretty? They were actually used to raise peregrine chicks in captivity, so the chicks would see a parent that was similar to a peregrine.