A friend loaned us the DVD of How To Train your Dragon. I enjoyed it immensely.

Also, the Big Bad Dragon at the end looked like one of these:

Whereas Toothless was obviously one of these:

Or maybe more of a Horned Toad, for the spikes on the back of his head, but yeah. As lizards go, they used the cuter ones for the hero. 🙂

Yet more dinosaur behavioral ponderings! These are fun to come up with, because there’s absolutely no way of proving or disproving them. 🙂

I was thinking about how velociraptors might have actually been in real life. Because of Jurassic Park, we have this idea that raptors and other dromeosaurs were these lethal killing and eating machines that prefer to eat humans better than anything else. Intelligent pack hunters that are always portrayed as disemboweling larger unfortunate dinosaurs.

But really, the actual velociraptor was only three or four feet tall. The Jurassic Park ones were based on the Utahraptor, which was actually six feet tall, but they still called it a velociraptor.

They’ve also found that most dromeosaurs had feathers, ranging from a downy coating like a kiwi, all the way up to feathers more like an ostrich. People debate endlessly whether they could fly or not.

So, I think we need to shift our perceptions. Instead of thinking of raptors as heartless, mechanical eating machines, let’s think of them as birds. Something akin to a roadrunner. And don’t say “they hunt in packs”. Say rather “they live in flocks”. Birds are pretty lethal predators, after all. Ever watch an egret hunt frogs? Yet we don’t draw them disemboweling other animals (except for the occasional hawk picture with gore added, looking at you, Audubon).

And I want to postulate that they ate bugs.

Bugs! Most birds have insects in their diet. Heck, most small predators eat bugs at one point or another. Ever see a cat catch and munch a grasshopper? And back in ancient times, they had two-foot-long cockroaches and dragonflies with four-foot wingspans. Something had to eat them, and why not these nasty little bird-creatures with sharp teeth and claws?

Naturally they wouldn’t have eaten only bugs, any more than any modern animals are entirely insectivores. Roadrunners also eat snakes, small lizards, mice, and whatever else they can fit down their beak. I imagine velociraptors and other smaller dinosaurs were the same way.

Well, I’m fairly satisfied with Morin’s details, now. Kelty, if you want anything changed, or some kind of distinctive logos or trinkets or gems added, now’s the time to speak up!

I’m still tinkering with the background. I’m thinking of fudging the rock texture with, well, a rock texture, because I’m just not having any luck drawing it by hand.

Cross-posted from DA. I thought I ought to put this in my blog, too.

I was reading this lady’s blog post about her flock of guinea fowl. She mentions that whenever a fox or something tries to snatch a guinea or a chicken, the guineas gang up on it and scream at it until it runs away. She hasn’t lost a single bird since she got her guineas.

I was thinking about that and laughing to myself about it. I used to have one guinea, and she was freaking loud all by herself.

So then I started thinking about hadrosaurs. You know, the duckbilled kind.

They had almost no way to defend themselves. No claws, no plate armor, no spikes, and they couldn’t run particularly fast. All they had was their funky crests full of chambers and tubes. Some people have even speculated that some of those chambers had combustible chemicals inside, like the bombardier beetle has, to let them breathe puffs of fire at predators.

But I was thinking about that guinea story. What if hadrosaurs were just so freaking LOUD that they could chase off most predators?

Think about it. They moved and nested in herds of hundreds and hundreds of animals. Say some carnivorous critter comes a-sneaking out of the woods, and the nearest duckbill starts shouting about it. Immediately twenty or so others run up, and they all stamp and shout and scream. Animals that size, with headgear to amplify the noise, would probably shake the ground and deafen the predator. Predators, in general, don’t like being found out and shouted at. Nine times out of ten, they could probably run off just about anything that dared sneak up on them.

I’d love to draw a bunch of them shouting down a tiger, for some reason. And the tiger is all bunched up, the way cats do when you surprise them.

A couple of pics that amused me when I stumbled across them.

First up: Getting motivated for exercise!

Exercise by ~KM-Mafia on deviantART

For this next one, even if you don’t know much about Transformers, you should still get the joke.

Optimist Prime by ~avid on deviantART

Worked on getting the shading smoothed out, and started the details. Got this far and my brain started gagging, so I decided to call it a night.

Also, see his right arm (on the left)? The one holding the sword? The position of the elbow gave me absolute crap for at least an hour. Maybe that’s why my brain is gagging.

Anyway, he’s starting to look like he’s wearing armor. I’ll get him mostly finished next time I tackle him, and then on to the background!

Made some progress on Morin tonight. Fixed some of the cave perspective so you can see the sky, so it looks more like we’re looking up at him.

Defined his highlights and shadows a little more, as well as some details on his outfit. Next up: Heavy detailing!

Having an attack of the guilts about all these commissions waiting in the wings, waiting to be worked on. So I figured I’d tackle them in reverse order. Here’s this mysterious masked warrior guy named Morin.

He’s supposed to be standing in front of a cave. 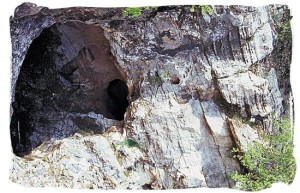 My tentative ref for his armor, from Dynasty Warriors:

The main problem I have with this pic is the original sketch was supposed to be looking up at Morin, who s looking down. But my ref of the cave is looking down at the cave, so when I put down-cave behind up-guy, he just looks weird and short. I have to repaint the whole background, but oh well, I did the whole thing in about 20 minutes anyway.

Feedback is welcome, especially on the armor! It was described as “dark clothes under light-colored armor”, which left me at sea as to the colors.

Waterfall City, from the Dinotopia books by James Gurney.

They changed it juuuuuust enough so they wouldn’t get the copyright police called on them. But watch Episode 1. Notice how many dinosaur-inspired creatures there are, like Jar Jar Binks obviously being a duckbill dinosaur with snail eyes and stupid floppy ears.

Gah, I didn’t realize this sketch came out so light.

Anyway, I was musing about Mephiles in Sonic 360. He’s like this demon that sort of just takes hedgehog shape for convenience. When the game had just come out, I saw a reviewer remark that Mephiles is obviously a play on Mephistopheles from Faust. You know, the demon that offered to give him what amounted to the whole world in exchange for his soul. (Kind of like the Picture of Dorian Gray, now that I think about it.)

Anyway, Mephiles being based on this, why shouldn’t he also be after people’s souls? Especially Silver’s? I was always intrigued that Silver actually winds up with a moral dilemma in the middle of his story. “Is it right to go back and time and kill someone, even if you’re saving the future by doing it?” It really stymies him.

I like moral dilemmas, and I think it would be even more fun if that was how Mephiles planned to get Silver’s soul. The instant Silver committed his little murder, Mephiles would show up and collect. Or, that would be the plan, anyway.