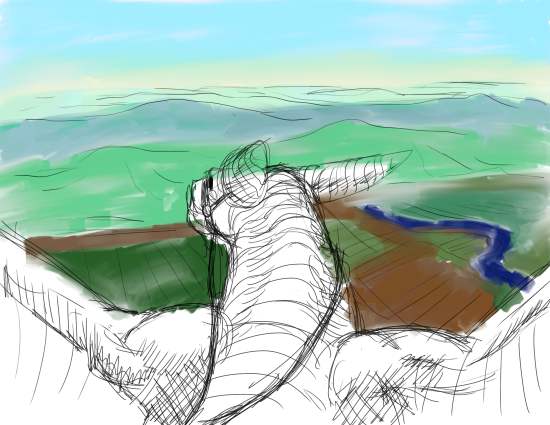 This started out as just a sketch of a rider’s eye view if they were dragonback.

Then it turned into practice painting landscape perspective.

It kind of looks neat, though.

Art had ceased to be fun for me, so I’m trying to make it fun again.

What do you get when you mix Megaman … 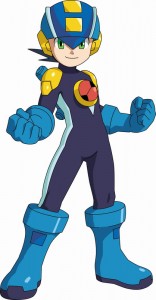 …with World of Warcraft?

About all I can say for it is that it was fun to draw. 🙂

All right! I’m finally done with this pic. You remember this one:

Anyway, I started in Photoshop like usual, with a gradient.

I went with that particular gradient because I was going for a soft, neutral evening coloring, with the Master Emerald in the back being the light source.

Then I laid in the mountains …

And the shading and brickwork of the pyramid thing and steps.

I’d started working on the characters …

…and got about this far when my computer exploded. Photoshop went away. I was left with Painter, which fortunately was installed on my external hard drive, along with all of my art files, fortunately.

It’s a good thing I have a chronic mistrust of computers.

Anyway, notice how the background mountain is now all smooth and painty looking? I remembered how much I loved Artist’s Oils > Wet Brush.

I finished the shading on the characters and the big emerald back there in Painter. I also remembered how lazy Painter lets me be. Photoshop makes you put brush strokes just where you want them, and if you don’t like it, then you have to either erase it or paint over it.

In Painter, there’s these things called Blenders. It’s like taking your finger and smearing the paint around until it’s all smooth and mixed. I can actually scribble colors on randomly, then blend them and blend them until they’re perfect. When you’re as lazy as I am, this is great.

Anyway, I almost didn’t finish this pic, and it took me a long time to update this blog again after my compy ASPLODED. It kind of took the heart out of me. I’m back to normal now, hopefully. I remembered how much I enjoy Painter. 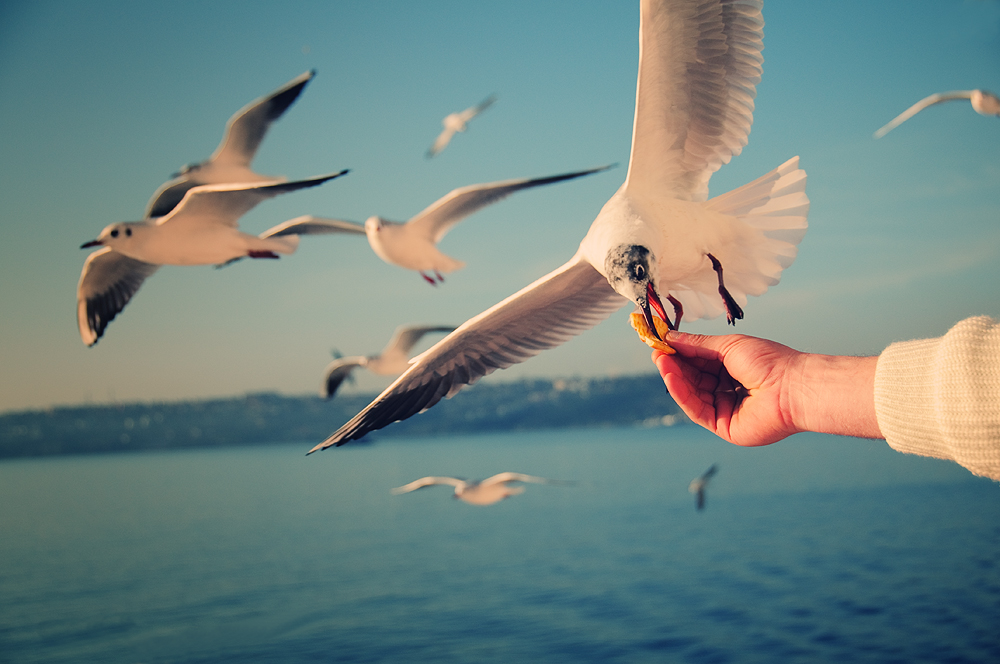 healing touch by *gokcentunc on deviantART

I just loved the “frozen moment” of this photo. In the comments, the person said the photo isn’t manipulated or anything–they just happened to snap the photo at the right time. Simply amazing.

Well, it didn’t really explode. See, it was my brother’s computer, and I inherited it when he upgraded. I’ve been playing World of Warcraft in the evenings, as a healer.

Anyway, there’s this one boss that’s like something from Cthulhu. He’s an eldritch abomination, and at a few points in the fight, he casts Insanity on the group, and you have to fight all your teammates.

Also, not my screenshot. But just so you get the idea. 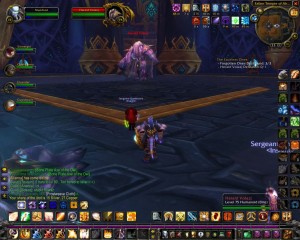 We got to the Insanity part, and for some reason the other Damage players couldn’t hack fighting themselves, and they all died. The tank (main guy who the boss beats on) came and saved me, though, and we went after the boss together. I alternated between healing the tank and throwing Damage Over Time spells on the boss, which was about as much mana as I could manage. When I ran out of mana and had drank my one mana potion, I realized I had Shadowfiend, a little beastie that recharges your mana as he beats on something. He gave me almost full mana.

And then the boss went down, and the tank and I had two-manned the boss. It was so awesome.

I logged off WoW and was idly browsing the internet when the computer randomly Blue Screen of Death’d. Specifically, it Stop Errored, with pretty colors across the blue.

Pretty colors across a BSOD are not the greatest omen in the world.

The computer wouldn’t come back on. It died at a different point in trying to boot, one time with a loud pinging sound. We hauled it outside and treated it to a can of compressed air and the vacuum, which still did nothing.

So my husband gave me his old desktop, which isn’t quite as fancy as the other one. And it doesn’t have Photoshop on it. Which gimps my art blog-ness.

I might have to go back to using Painter. Except Painter just doesn’t work the same as Photoshop. Maybe I can find a tutorial on how to create the one airbrush in Painter …?

So yeah. More art coming soon. As long as no computers blow up on me.

I’ve been kind of burned out since I finished the griffins. Kind of REALLY burned out. So I’ve been playing lots and lots of Warcraft. Such a great way to unwind.

Anyway, I also gave Sonic Adventure a shot again, since I was feeling nostalgic. I finished Knuckles’s story (ugh, the voice acting!). I was making lots of fun of it by the end, so when I got that last shot after the credits, of Knuckles sitting in front of the Master Emerald, I had to parody it. 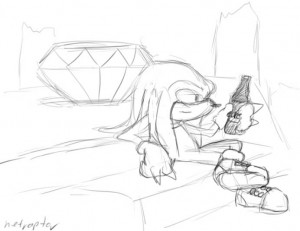 Because Knuckles should really have a Coke. I wanted to find the Coca Cola font and put “Always Coca Cola” across it, too.

Well, a few days passed, and my senses returned. I took another look at the sketch. I did like it, but the ending of Knuckles’s story has always bugged me. He gets so gypped, worse than all the other characters.

So I tossed in some Coke-drinking buddies.

Back before Zephyer was deroboticized and nobody knew where Talon was from. 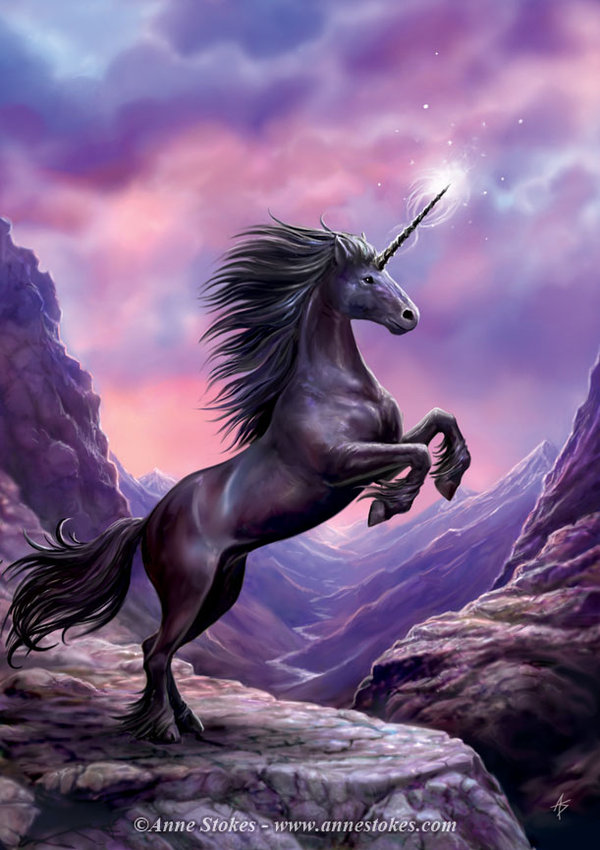 Black Unicorn by *Ironshod on deviantART

Here’s a very nice one from Anne Stokes. She draws a lot of art for Dungeons and Dragons and fantasy magazines, and she’s doing a series of unicorns right now. I just loved this black one. She said she tried to make it look like a black pearl, which makes the colors just so much more awesome.

Or is it Gryphons? Or Griffons? Everybody and their brother seems to spell it differently.

I did Lydda, Blade, and Kit pretty much at the same time. I needed Kit’s black to contrast with Lydda’s browns, so I kept him in there as a comparison. Then I thought, eh, there’s not much of him to paint, so I finished him off, too.

And if my commissioner is happy with this, I’m gonna call it done. I’m getting burned out on art.

Got Don and Shona finished. Two characters for the price of one! Human faces are hard to draw, but I do better when I get reference.

And for the third griffin, I used a buff orpington as a reference. 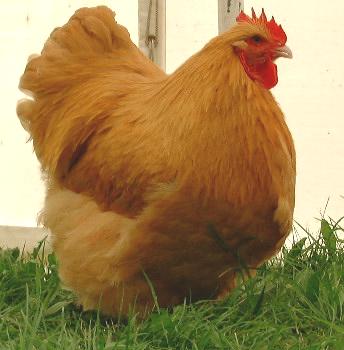 Such a pretty golden color!

And a golden griffin the same color as the chicken. Who’d have thought that a chicken would make such a pretty color for a griffin? Too bad the griffin doesn’t have a red comb and wattles. They set off the chicken so nicely.

That golden griffin, Elda, is the same one as on the cover of the second Derkholm book, Year of the Griffin: 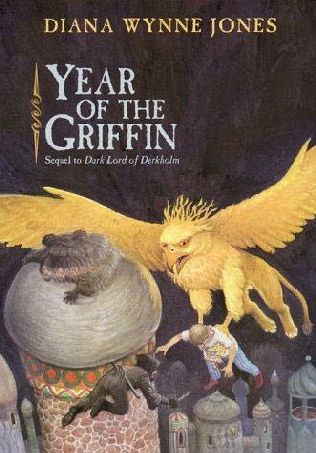 Isn’t that an atrocious picture? You can’t even tell what’s supposed to be happening. Anyway, same griffin. *points*

A person on DA kindly posted the actually description of Callette (whose name I’ve also been spelling wrong), and it turns out I’d made her waaaay too gray.

So I corrected her colors, but it kind of put me a day behind.

Much warmer now! She also doesn’t stand out from the other griffins quite so oddly anymore.