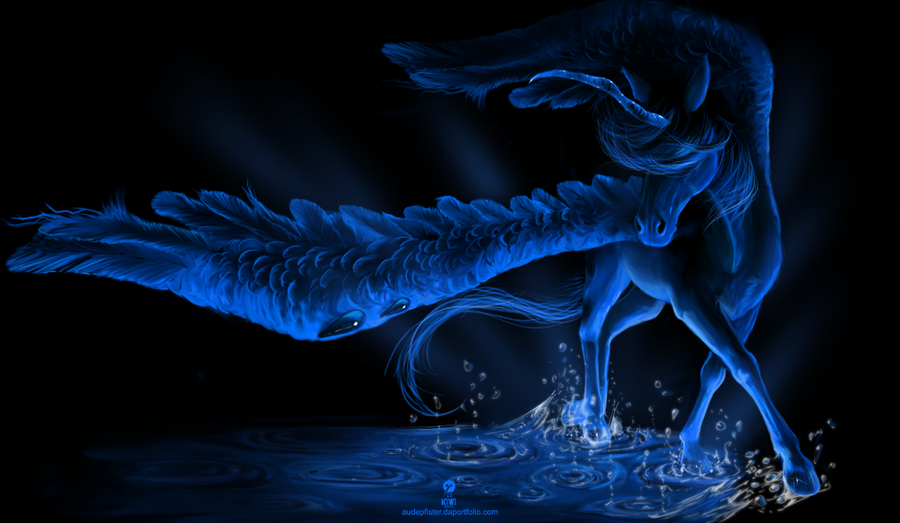 A version of Kare by *whispersss on deviantART

This person did a whole series of horses in mono colors. This one is blue, but there’s also gold, green, teal, and orange. It was really a toss up between this one and the teal one for my blog feature, really. I just love these. But then, I’m a sucker for mono-color or very limited-palette pics anyway.

As you can see, the large blocks of color are coming along nicely, but I’m not finished yet.

And a day later, he’s all done!

For some reason, I just love the gear that he’s sitting on. I had so much fun drawing it, then making it all cracked and weathered, with grass and flowers and stuff growing up through it. Also, purple smoke for the win.

I’m taking the weekend off from commissions. I’m gonna draw something for fun before I tackle my last couple, or I’m gonna burn out something terrible.

Phoenix in Spring by ~CobraVenom on deviantART

I just loved this pic. It’s like a tapestry. I don’t think I’ve ever seen a male and female phoenix together before, and I love the flowers around the borders. Something about flowers just make any pic that much prettier.

Here’s the next commission project I’m working on:

I’ve had the worst trouble on his face. I’ve erased it and redone it four or five times now. See, here’s my references here and here.

I didn’t think this would be very hard, but the likeness is what’s killing me. Sure, I can draw dragons. But making the dragon LOOK like somebody? That’s a little tougher!

As you can see, I still don’t have it pegged, but I’m closer.

My next commission was to draw this girl from an anime called Bleach. Her name is Soi Fon and she fights with this dagger-like fist weapon.

So this commission unnerved me quite a bit.

First, I went hunting for pose reference. When Google turned up nothing, I went to deviantart and started hunting around in their stock photo section. Lo and behold, I found this. It was almost exactly what I needed.

So I did my first sketch.

I changed the position of her hands and her right leg, because I wanted her off the ground. You know how people in anime fly around in the sky when they’re fighting. That was the look I was going for. Also, this character wears these weird traditional-Japanese style clothes, so I roughed those in, too.

Then I dumped it to Illustrator.

Illustrator is a vector program, meaning that it draws images with mathematical points and lines. You can see the zillions of them in her face here.

This is how it turned out.

If I was really masochistic, I’d have done all the shading in Illustrator, too. But I’m far too lazy to be masochistic.

Next I dumped the file into Painter, and painted a sky with clouds. Don’t you love the way Painter makes it look like I used a real brush that was loaded up with thick, smeary paint?

Then I tossed it all into Photoshop for the final shading and details.

Tada! It was a ton of work, but I think I pulled off the anime look. It’s really hard to draw, not least of which because Japanese art in general has this obsession with perfection. And I’m not into perfection. I’m into getting it sort of close and calling it good.

I just love painting on black or other dark colors. It always comes out so awesome-looking.

This is a commission I got from a girl on deviantart for one of her characters. First, the sketch:

She’s camping out by herself and shooting lightning from her hands. The very concept begs for awesome lighting.

I dropped in a cool-to-warm gradient:

And apparently I also drew the moon on this layer. Crap.

Anyway, I then did the light sources right away, so I’d know what direction to shade the highlights and shadows.

Then I started on the highlights. Booyeah.

It looked so cool at this point that I almost could have called it finished. Ahh, but the shadows beckon.

Much more solid-looking now! Also, camping gear in the foreground, because I was lazy and didn’t want to bother drawing tents and things.

Now for the grand finale: background!

Aside from a bunch of premade-brush-shortcuts, it looks pretty good, don’t you think?

The background on that giftpic was too warm.

So, even though I liked the watercolor effect, it 1. took too long and 2. was too hard to rework. So I scrapped it and went with my old Corel Painter standby, which is the Oil Paints > Wet Brush, and the Oil Pastels.

Ta da! Much prettier! Now I’m off to Photoshop to work on the character. And the rocks. Again.

Well, I’ve begun construction on my third and final giftpic. This one’s for Lutra, whose character is an otter. Which I was amused to find is part of the Latin name for the otter.

Anyway, for a change of scenery, and because all these watercolor blogs I’ve been reading have given me an appetite for it, I loaded up Corel Painter and started messing with the Watercolor brushes.

Painter does this neat thing where you paint a few strokes, then the paint actually runs down the canvas a little ways. Makes it feel like you’re using real watercolors. Except your paper doesn’t curl up and create little puddles in the color.

So, anyway, in case you can’t tell, this is the otter character-girl resting on a rock on the edge of a river or a lake. I started shading her, and discovered that when it comes to actually shading a cartoony character, I like my Photoshop brushes better. Fortunately, Photoshop and Painter play well together. But that’s a topic for another night!

This pic just cracks me up. I know there’s lots of things wrong with it, but heck, it was fun.

My sis, the vampire! Sans sparkles.

That makes me a bad person. And artist.

But doggone it, I’m sick at freehanding sucky faces! This one is going to look RIGHT.

Besides, I’m making my sister into a vampire. I want to get that part right, too.

Now … sparkles, or no sparkles?